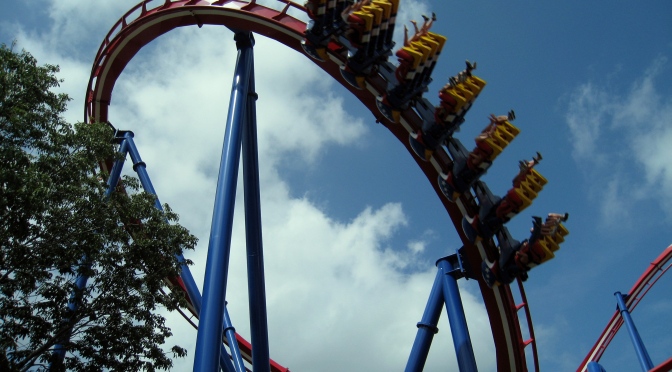 It’s the theory behind what encourages people to ride a physics experiment that attempts to defy gravity, encourages people (like John Miller) to advocate for gravity-defying safety (??) that baffles me. Perhaps it’s experimenting with gravity-defying physics, that encourages rides such as suspended with cars swinging from side-to-side. . . stand-up (yep, you ride “standing-up”). . . inverted with cars dangling down from the track. . . AND. . .

Perhaps it would be easier to simply circumvent the theories. As if a life already spiraling out-of-control doesn’t have enough “thrills”, enough “twists”, enough “turns”.

It’s now early Thursday morning, January 17, 2013. From this              vantage point, I can still hear the tethers slapping against the catapult, and my anemic-fried,-sleep-deprived brain cells are trying to figure out (at 6:00 AM) how I had ended up tethered to the catapult in the first place.

It’s not exactly the epitome of “fun” when it begins to register that perhaps if doctors had not dismissed me as a “hallucinating hypochondriac” for the past 3-4 years, and had decided to treat the myriad of symptoms I was experiencing as collective indicators of a larger root problem instead of treating what they dismissed as a series of ‘unrelated-that’s the way some people are-prescribe medication to dismiss-treat the symptoms only’, I might not have ended up tethered to a catapult, or at least not one as ginormous as the one I did.

Now doctors are saying they aren’t 100% sure what is causing the anemia, yet are fairly certain that the ‘unrelated-way-you-are-prescribe-medication-deal-with-it’ symptoms might possibly be

related to whatever is causing the anemia. (I think I just stepped off  ‘MIND ERASER’). To be sure, doctors suggest running a medical test that won’t give any conclusive results but will allow them to plan for and perform major high-risk surgery to rearrange my insides while removing parts of me. (If I can’t circumvent this ride, I’d rather be “standing-up” mid-clothoid loop).

Pardon my processing delay (can I blame it on the anemia?), but let me make sure I’m understanding you correctly: for years, you’ve been content to define me as a hallucinating hypochondriac and prescribe medication to address what you’re classifying as ‘pseudo symptoms’. Now you want to run a test that will only yield inconclusive results at best and use inconclusive test results to perform major high-risk surgery, which I might not survive or survive without, for a root problem you haven’t fully diagnosed yet??

Maybe it’s just me. Maybe it’s post-crater creation syndrome         causing the processing delay. Maybe it’s too many clothoid loops.  Did I miss something???

I asked for a second opinion.

“What do you mean ‘a second opinion’?? In your case there aren’t any other options! The only way to ‘fix’ the problem is this surgery. If you wanted other options, why did you wait so long to have it treated??”

Did I miss something again??

The doctor wanted me to grant permission to run the test (inconclusive results) as part of the prep for the surgery.

Enough with the processing delays. I was going straight for the meltdown.

Initially, I refused to have the test. I was told since I was refusing treatment and as long as I followed up with the specialist the doctor would refer me to, I would be discharged once a hematologist had seen me and signed off.

My hemoglobin and hematocrit levels (HH levels) were still dangerously low at 8.2 according to the early morning lab report. Thankfully, the hematologist said there was no rush to be discharged before Friday.

It took every brain cell the anemia hadn’t fried to figure out the next steps. By Friday morning, I had somewhat of a plan formulated. I can’t say it was a “starburst” of an idea. After my consultation with the doctor, I decided that even if the surgery was my only option, this was not the doctor I wanted. And since the doctor was under the impression that I was “refusing treatment” with the exception of the hematologist and nurses, I really wasn’t being treated any longer. The plan? See if I could have the test and get the report and then follow-up with a specialist of my choice. I opted to ask the nurses about the logistics of my plan.

On Friday, after promising to follow-up with a specialist I chose, HH levels still at a dangerous low of only 8.3, and inconclusive test results report in hand, I was discharged.

I shouldn’t have been.  It’s a theory.

Like the theory behind what encourages riding something that could potentially wipe out any remaining traces of logical brain cells, perspective is a tricky thing. It has a tendency to travel incognito.  It’s very opinionated if you ask me. Probably too opinionated for my own good.  It probably comes from a distorted theory of relativity (maybe that’s what encourages gravity-defying ‘safety’?) And that’s where the trouble starts. “In my opinion . . . ” or “No, that’s not the way it’s supposed to be. It should be. . . .” The literary element of irony is defined as when what is expected conflicts with reality. Perspective becomes a classic example of the literary element of irony: what I expect (demand?) clashes with the reality of my life. It gets messy and I don’t necessarily like “messy”. The inciting incident in the exposition gives way to the rising action and the rising action has far too many complications and curve balls. In my very humble over-opinionated perspective, this is just too messy.

Unfortunately, I was going nowhere fast (ah hem, yeah, the meltdown), literally and figuratively. Slow down and hurry up and wait. Ugh.  And while you’re waiting, be sure to slow things down even further with a meltdown. At this point, I was pretty much a prime target for the next oncoming 18-wheeler. Or maybe the next high-speed locomotive. I think the sloth made it across the road in record time (relatively speaking) and left me in the dust.

“Though an army besiege me, my heart will not fear; though war break out against me even then will I be confident.” ~Psalm 27:3

Or am I perceiving there are wolves? Do I expect to see the army about to besiege me?

True, life is a roller coaster. It has its ups and downs, but sometimes you want to throw-up.  When life is a chowl of borries, when life is sdrawkcab and downside up your theory of relativity quickly becomes distorted.  Opening your eyes mid-clothoid loop leaving you staring at the face-plant-style crater-impact zone as centrifugal force snaps the tethers has a tendency to do that.

Suddenly, it seems almost impossible to lose heart. Suddenly, the wolves are no longer howling, no longer growling. Suddenly, the besieging army is running away in fear. Suddenly, your perception of reality becomes a gravity-defying – gratitude-defining – altitude-gaining – heart-ittude!

One act of thanksgiving,
when things go wrong with us,
is worth a thousand thanks
when things are agreeable to our inclinations.
~St. John of Avila

Perspective realignment takes practice. Then again, I imagine it takes a little while to realign perception after “MIND ERASER”.

“Slow” or “No go” were the only choices I had. It would take a while for my theory of reality to realign itself.  Having a meltdown seemed to feel more “comforting”. It’s a theory.

Follow Eighteen Inches: A Head to Heart Journey on WordPress.com